Invariably when you talk about raising meat rabbits, someone will ask, “What’s the best breed?”

The one you can find in your area. 🙂 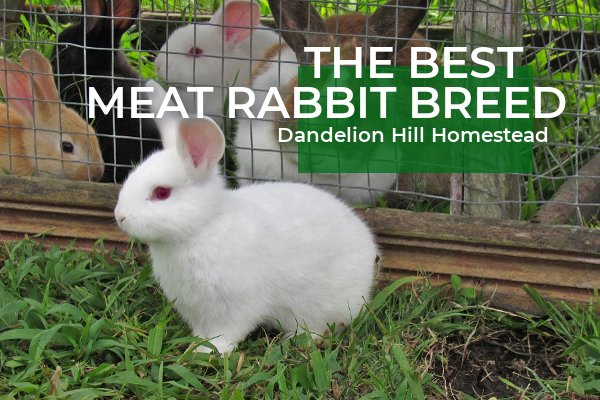 There are several good breeds (I share my top seven later in the article), but the practical reality is you will have certain breeds that are more easily available to you where you live. Take advantage of that. Buy a couple of healthy rabbits. Learn to care for them and breed them.

As you grow your rabbit skills and begin to make connections within the rabbit community in your area, you can explore different breeds and take the time to find the ones that are of interest to you (it can be a real treasure hunt).

Where to Find Rabbits

The easiest answer is probably Craigslist or a local Facebook group (search “rabbit” and “your city or county”).

When you look on Facebook, you are not supposed to mention buying/selling or list dollar amounts. Basically, you talk about all the lovely rabbits being born and PM the breeder privately to talk money and meet up.

If you live in a more rural area, ask around for contacts or look for animal swap fliers at your local store. If you have any 4H contacts, they may be able to help as well.

Cost will vary by area, but what I have seen and heard from other breeders is that meat mutts (sometimes called barnyard bunnies) are likely to cost in the $15-$25 range. Purebred bunnies are more. If there is a pedigree involved, even more.

When you are just starting out I would encourage you to purchase a couple of healthy barnyard bunnies (unless you happen upon a nice deal with purebreds).

Where to Meet Up

For safety’s sake and for bio-security, most breeders are no longer inviting buyers to their rabbitry. It is common to meet up at a park or shopping center to examine and buy rabbits. Be sure to take a carrier or cardboard box with you to transport the bunny home.

This article contains affiliate links. If you click and buy, I make a commission (at no additional cost to you). My rabbits hank you for helping to pay for their new bunny friends. ❤

I’ve felt a bit awkward and rushed when meeting in a parking lot (it’s not the most comfortable of options), but I try to take my time to look over the rabbit and make sure it’s the bunny I’m looking for. I will not buy a sick rabbit (though I might take one with ear mites, very treatable) and I check the gender, twice!

Related Reading:
HOW TO PICK A HEALTHY RABBIT
Take them home healthy!

There are many different rabbit breeds and quite a few that have been developed as meat rabbits. When you get to the point you are looking for a specific breed it is helpful to do your research. Know what the breed is supposed to look like (characteristics, general size, weight, etc.) before you buy.

Many breeds have something to recommend about them, but these are my seven favorites. They have good size and have been bred to have good mothering skills, nice litter sizes, and are generally good-natured (with a bit of handling).

The king of the meat rabbit world is the New Zealand. They come in five recognized colors – white, red, black, blue, and broken. Adult males weigh 9-11 lbs. and females are a bit bigger at 10-12 lbs. The kits are fast growers and with a little handling are usually quite calm and friendly. They’ve been bred since the early 1900s so they have great breeding stock qualities. It’s hard to go wrong with a New Zealand. I have three purebred New Zealands because they are widely available in my area. Newton (the house bunny) is a REW (ruby eyed white). I also bought a doe which turned out to be a buck (I should have checked three times) so I had to buy another doe (she really is a doe) and now we’re having litters of purebred New Zealands. Very nice litters. I would recommend a New Zealand in a heartbeat. New Zealand

This is another meat rabbit standard that’s been around a long time. They range between 8-11 lbs and have been bred to have good mothering skills and large litters. My DIL did have a couple of Californians and they were … moody. Yup, moody. They did well for her but were not terribly easy to handle. However, I’ve talked to several breeders who swear by them. Perhaps we had the exceptions. Californian

This is a fairly new breed. They were accidentally created by a couple of kids in the 60s. No lie. At any rate, they have pretty color and run 8.5–11 lbs. They are fairly rare so they are a bit hard to find, but they are a nice-sized meat rabbit with good qualities. Cinnamon

Not a good breeder, but certainly a good meat sweet bunny.

Rexes are a favorite because they come in many colors and have amazingly soft fur. While I’ve had no trouble with them in breeding and raising kits, I have had trouble with sore hocks (rexes tend to have thinner fur on their feet). My son also says they are somewhat harder to butcher than other breeds (the pelt takes more effort to remove). I’ve known a number of rex fans, so there are obvious plusses. Rex

These rabbits have very interesting fur. Their guard hairs are transparent and that gives them a special sheen. They also come in a number of colors. Very fun. They run  8-11 lbs.  Satin