I had never heard the word “cucurbit” until I started growing different types of squash (it’s the family name for pumpkins, winter squash, gourds, and more).

My sweetie loves acorn squash and I’m a lover of pumpkin pie (a match made in cucurbit heaven), so we were happy to try a few of these in our garden. 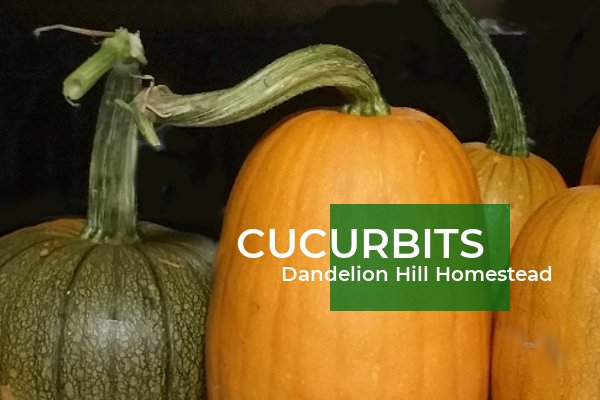 We live on a plateau that faces south, so we planted a number of different cucurbits along the top of the rise and trained the vines down the hillside as they grew.

They are such pretty plants it was like landscaping, the large mounds giving us an edge to the hill (and hopefully keeping our grandkids from tumbling over).

We did cover the grow area on the hill with landscape fabric to keep weeds from popping up through the plants.

This article contains affiliate links. If you click and buy, I make a commission (at no additional cost to you). Thank you for keeping me in pumpkin pie. ❤

You Start with a Seed

(For the purpose of this article I’m going to talk about pumpkins, but what I write is true of most cucurbits.)

Pumpkin seeds are large and flat. They germinate easily, but they are heat lovers, so you have to be careful about when you start them.

If you have a long growing season, plant them outside when temperatures move in the 50-60° F range (well past your last frost). If you are like me and have a shorter growing season (I live in zone 61 with temperatures in the negatives during the winter), you will likely have to start them indoors under lights until warmer weather shows up (I start mine early may and move them out when temperatures allow).

When I plant them out, I have row cover handy in case a spot of cool weather surprises us. Cold temperatures will slow or stunt growth.

One year we were scrambling to make covered frames and a cold snap caught us. Several of our beds were hit by the low temps.

The covered pumpkins and blue Hubbard squash did amazingly well that year. The other uncovered squash (Turkish turban, acorn, and delicata) limped along for a while and finally produced a few small squashes. They just couldn’t seem to catch up.

Do read the specifics on your seed envelope, but in general, you want to plant 4-6 seeds a few inches apart in a mound of dirt. When the seedlings come up, pick out the strongest two or three plants and pull the rest.

They need to be planted in full sun in rich soil that drains well (the mound helps or you could do as we did and plant them at the top of a small ridge or hill).

As your plants are growing, do water them deeply at least once a week (more if your temperatures call for it, watch for any wilting and check to see if the soil is dry). They have fairly deep root systems so it’s better to water deeply a few times than to water many times lightly.

My plants seemed to hate water on their leaves so I watered at the base of the plants with a hose instead of using a sprinkler on them. Turns out you want to keep the leaves fairly dry anyhow to cut back on disease and molds.

Pumpkins are fairly heavy feeders which means you will likely want to fertilize them a couple of times.

Since I raise rabbits, I mix rabbit poo in the soil before setting out my plants and toss more on during the growing season. It breaks down as I water the plants and gives added nutrients. You could, of course, use the fertilizer of your choice.

After your plants take off a bit, you will begin to see large yellow blossoms. At first, the male flowers show up, but eventually, you’ll get some female blossoms further out on the vine. 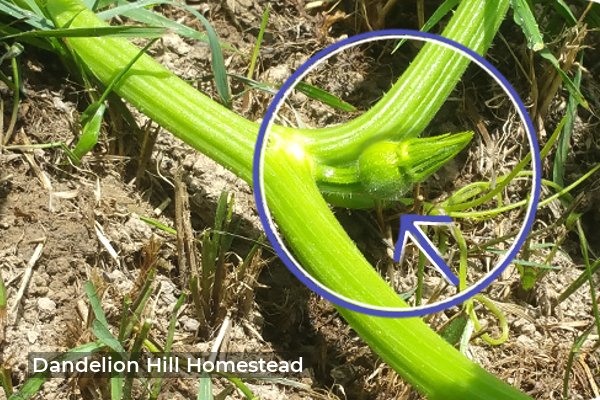 Look for the small bulb.

The females have a small bulb at the base of the flower (that will eventually become the fruit).

It’s rather exciting the first time you find one and it starts to develop. It’s been my experience that a few of the firstfruits don’t usually make it. That might be because of our cooler weather or some other conditions unique to us. Either way, my plants eventually kick into gear and produce a good harvest.

Generally speaking, the larger the fruit, the fewer you will get on each vine. So if you’re growing larger Cinderella pumpkins (they’re around 20+ pounds each) you’ll likely get 1-3 per vine and if you are growing the smaller Sugar Pie pumpkins, you’ll get a mess of them.

As your growing season comes to an end, the leaves will start thinning out and your pumpkins will turn orange. You can cut the vines back a bit, removing small pumpkins that aren’t going to ripen in time.

When the stems start drying out, cut the pumpkins free leaving a few inches of the stem attached. If your weather permits, let them sit in place for a while to cure (10 days or so). If you have an impending frost, pull them inside to cure before storing them in a cool room (50 and 55°F).

So far we have experimented with several pumpkins and squash (gourds are on the wish list). Here are our favorites to date.

And for your baking pleasure … 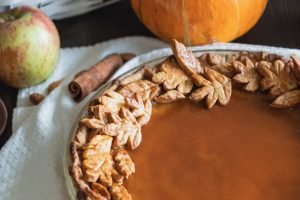 My sweetie can never leave a recipe alone (which is not really a complaint). He takes a standard recipe and tweaks it a bit and then maybe a bit more. As an aside you can use pumpkin or squash (or a mix of the two) in this recipe.

Mix in the pumpkin purée. Stir in the evaporated milk. Beat together until everything is well mixed.Pour into pie shell and bake at 425°F for 15 minutes.

After 15 minutes lower the temperature to 350°F. Bake for 45 to 55 minutes more. The pie is done when a knife tip inserted in the center comes out wet but relatively clean. The center should be just barely jiggly.

Cool on a rack for two hours. The pie will deflate as it cools.

PIN THIS FOR LATER